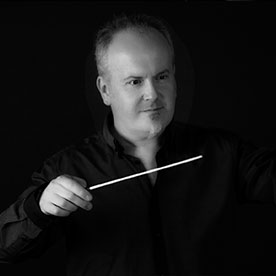 Steve Bingham studied at the Royal Academy of Music, where he formed the Bingham String Quartet, an ensemble that has gained a reputation for both classical and contemporary repertoire over the last 30 years, recorded many CDs and toured worldwide.

As a soloist, Steve has performed at prestigious venues such as the Royal Albert Hall and has become known for his unique solo recitals which juxtapose acoustic violin works with multi-layered pieces for electric violin and live-looping. He has produced four solo albums of music as diverse as Tallis, Bach, Bartok, Nyman, Reich, The Beatles and Daft Punk! Steve is now in demand as a conductor and is known for his enthusiastic and musical interpretations. He has worked with a variety of adult amateur and youth orchestras and is currently principal conductor for Ely Sinfonia, Ad Hoc Sinfonia and the City of Peterborough Symphony Orchestra.