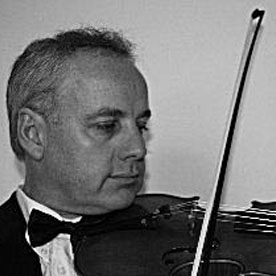 Stephen trained at the Royal Academy of Music studying violin under Clarence Myerscough and tuba under Patrick Harrild and John Fletcher. He has been an active freelance violinist, playing with the RLPO and in many West End musicals, as well as solo and chamber music performances.

Stephen had a long-standing involvement with the National Children’s Orchestra and was the principal conductor of ENCORE (the NCO alumni ensemble) for ten years.